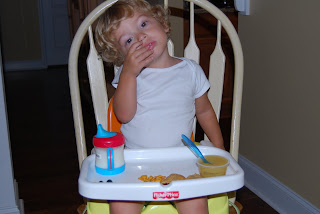 This is one of those posts where I am looking for some advice! I know I am a pediatric dietitian and am supposed to be great at feeding kids but I just struggle with what to feed Ben for breakfast. He eats just about any breakfast food so that is not a problem. The problem is finding quick and easy things. Most mornings it is either a cereal bar or a frozen waffle and some fruit. In the picture above he is eating applesauce and goldfish because that he what he wanted. I am wanting to add a little variety to what he eats in the morning and am needing some suggestions. Don't suggest eggs and bacon because I am not going to cook that in the morning! With school starting back in a couple of weeks our morning time is going to short so it must be quick. Any suggestions would be great and I know Ben would appreciate it greatly!

I am starting to join the land of the living again so hopefully I will do better about blog posting! I hope to update the blog this week and do lots of posts. With not feeling well I have taken a grand total of about 20 pictures this summer so I need to get caught up!! On to this post...

We started a fun tradition in our family about a year ago. Every Saturday morning that we can we get up and drive over the mountain to Panera for breakfast. We all get a bagel and sit and enjoy hanging out for about an hour. It started because we were getting up early with a little guy and figured we might as well do something fun if we were going to be up early on a Saturday morning. The people at Panera know us by now and we get the exact same thing every week so we have our $9.46 ready. Ben loves "bagel day" as he calls it. We have even made Saturday morning friends because there are other people that do the same thing every Saturday morning. It is lots of fun!! I think it is so great to start these traditions as a family. 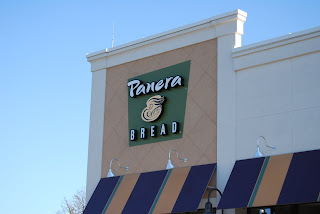 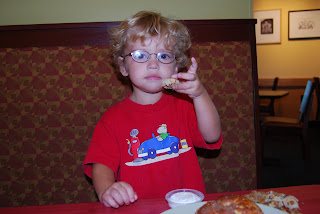 We are in a state of shock here at the Eckley house! It's a Girl!!! We are super excited. I don't know why we are so shocked. We really didn't care if it was a boy or girl but both Matt and I were speechless when it came up as a girl! I think we just thought that it was a boy. And all of you voting bloggers were right. I didn't believe you all either (even though it was pretty overwhelmingly girl!)

She is perfect. Everything is where it supposed to be and working great. She is still measuring like she will be here Dec 4-9thish. That is always such a relief to me to see everything is ok. Ben is super excited. He is just walking around saying girl baby!

Now the fun part for us. Picking a name! We are really bad at that. Hopefully we will have something by December. For now here are some pictures! 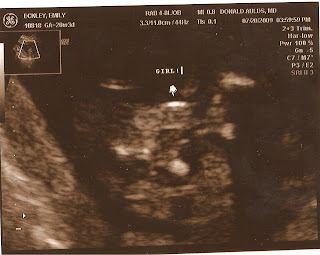 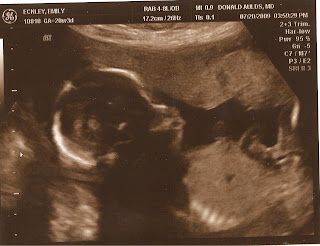 We have had some room movement going on in the Eckley house over the past few weeks. About 3 weeks ago we put up Ben's new big boy bed in his new room for him to try out. We were very apprehensive about how he would do in a big bed. I had read horror stories on other blogs about weeks and weeks of finding kids roaming the house when they transitioned to big beds. Those fears were all unfounded. Ben did awesome in the transition!! He loves his new bed. He got up only a couple of times the first night but since then he has done great. He was sad to leave his crib at first and would cry for his "baby bed" but he is now in love with his big boy bed!

Since the move to the big bed went so well, we decided to go ahead and finish up his new room. I have been planning this room since I think he was 9 months old. I picked out the bedding at Pottery Barn over a year ago since it was on sale. One of friends asked what I was going to do if he didn't like trains and I said "he will like trains - I will make sure of it!" Kids this age are so gullible so I just made him like trains since I knew that was going to be his big boy room. We had the room painted several months ago and when I first walked in and saw the blue I started crying. It looked so grown up. It is not a baby blue. It is sort of sad to give up all his baby stuff! But he loves his room and all we have done with it!!!! He is so proud of it and shows it to everyone that comes into the house. I think it turned out perfect!

Here is what it looks like from the doorway. 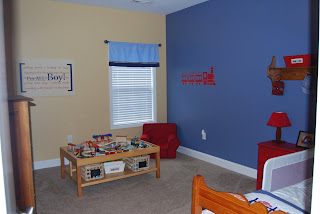 Here is his big boy bed. This bed is over 60 years old. My grandfather actually made the bed as part of a set of bunk beds for my uncles. We have a second matching one to go with it. My brother slept in it when he was young so Ben is the 3rd generation to sleep in the bed. Ben's favorite part of the room is the 4 train pictures hanging over the side of the bed. He lays in bed talking about them at night. 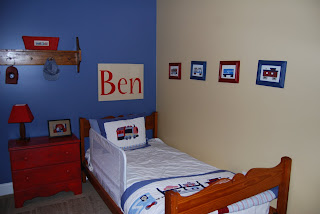 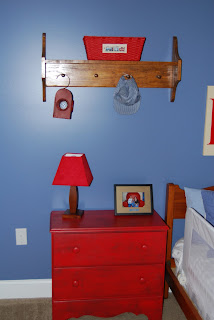 Speaking of things thrown away. Note the very cute Anywhere Chair from Pottery Barn Kids. Yep, that also came from the side of the road. It had a different cover on it but the insides were great so we just had to order a slipcover to match the room. But it was a $60 inside that we didn't have to buy. Amazing that someone would throw it away. You can sell it people or give it away. 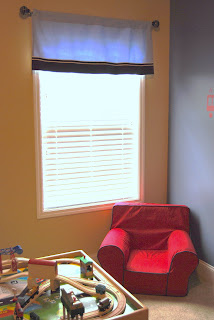 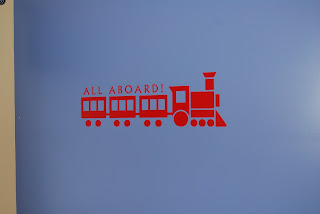 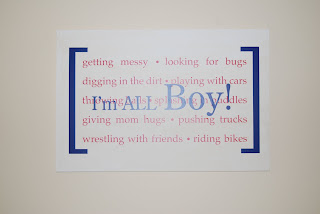 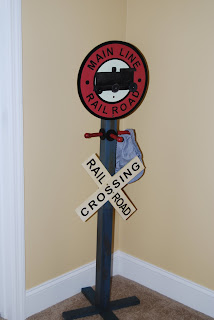 His new chest. I still haven't moved over his clothes from his old room but will soon. This chest was my brother's as well when he was little. 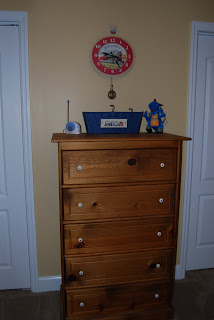 Well that is Ben's new "Big Boy Room" He loves it and I hope you enjoy seeing the pictures. I love how it turned out. And the best thing was I was adding up how much it all cost and since we used lots of leftover furniture and things found on the side of the room I think the whole room cost about $250 to redo. Not too bad if I do say so myself! The nursery is still set up next door and I guess I will start working on redoing it next week when we find out if the baby is a boy or girl!

Summer Fun on our Street

We live on an awesome street. As some of you know when we moved into our house 2 1/2 years ago, we were the only ones in the neighborhood. Since that time we have watched all the houses on our street go up and fill up. We are blessed with some wonderful neighbors. All around us are kids. Seriously I mean every house has at least 2-4 kids in it (and those that don't have young kids have tons of grandkids that live close by and come over all the time.) And they vary in age from newborn to 6th grade. And these kids love to play!! So this summer the moms decided to have some organized activities and fun for the kids. We have had Pancakes in PJs parties, outdoor movies, build your own ice cream sundae parties, campouts, water days, block parties & other fun activities. Today was my day to host the fun. I held an outdoor game day. We did water balloons, egg races, tag, red light/green light, potato sack races and lots more. It was tons of fun. After the games the kids all wanted to play in the sprinkler and baby pool so I set it all up and they had tons of fun. 3 hours worth of fun in the blazing heat. Needless to say Ben is still down for a nap! Here are some of the pictures from the fun today! 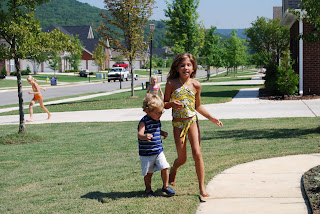 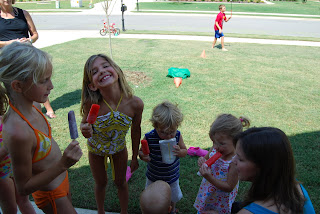 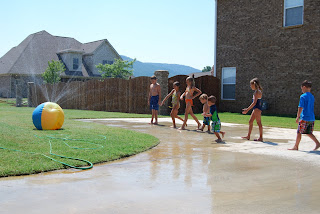 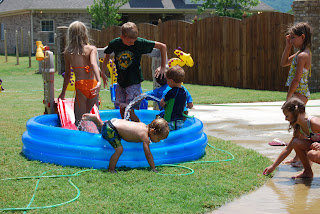 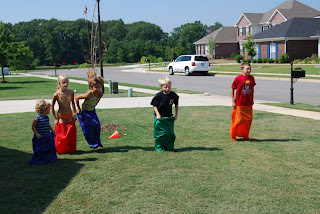 We had a fantastic long weekend. Very rarely does Matt get a holiday off but due to being out of town for some meetings the week before he got to be off on Friday. So it was a wonderful weekend at the Eckley household. Saturday was a low key day for us. Nothing too exciting. We went to our normal breakfast at Panera and then did some things around the house. We ate lunch at my parent's house and then got ready for our big neighborhood block party. This started last year and it was a great success so they had it again this year. All the neighbors get together and bring food and we grill out and have pools and slides for the kids. The kids all bring their bikes and decorate them for the 4th and have a parade down the street. And then it ends with a big fireworks show (well as big as you get on your street - it is illegal by the way which freaked me out). It was lots of fun and of course Ben had a blast!!! There were probably 75-100 of our neighbors there so it was fun to meet some new people and visit with our friends. Here are some fun pics from the day!

Ben being patriotic waving his flag! 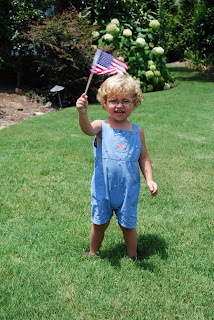 Ben went down the big water slide a couple of times but then was ready for some splashing in the baby pool with his friend Joaquin - our neighbor's grandson. 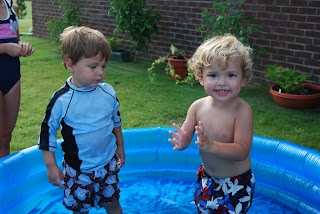 Shooting some hoops with Dad! 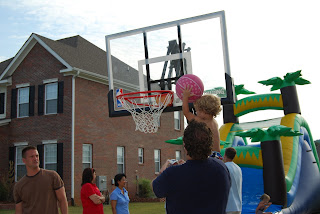 Ready to eat!! The boy has an appetite these days. He ate 2 hot dogs and wanted "more, more!!" He is going to eat us out of house and home as a teenager. 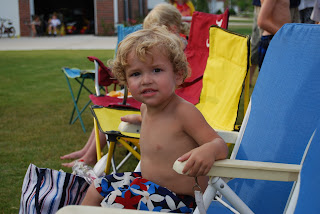 Ben in his decorated car for the parade! 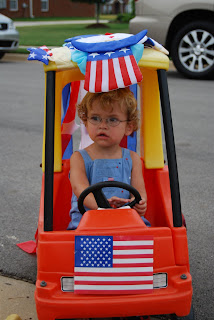 All the kids lined up for the start of the parade. 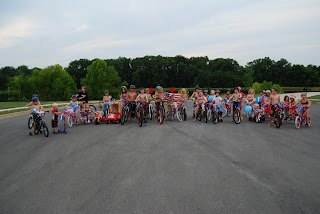 Ben had a blast motoring his little car down the street in the parade. He kept up with the big kids pretty well! 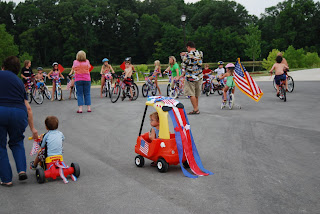 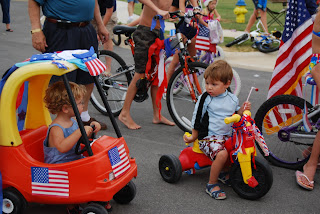 When the fireworks started Ben was not a big fan. He got in his car and took off down the street. He did not like how loud they were. So Matt pulled out his truck in our driveway so that we could watch them from our house (just down from the cul de sac). He still wasn't a big fan but he tolerated them. 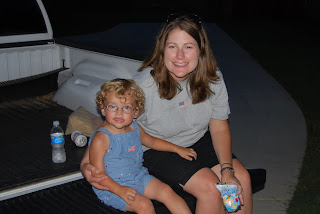