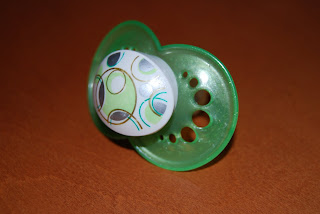 Don't let the title confuse you. We are not talking about sharing issues with 2 year olds (although that would be a good blog topic). It is all about the paci. For some reason Ben has started call his paci "my." He says it so cute and sweet and when he really wants it "my, my, my, my, my!!" We don't know why he calls it my but we go with it.

He has been attached to his paci since day 2 of life. He came out sucking and we knew we were going to need it. It was never one of those things where we had to hold it in his mouth when he was little. He could suck that thing like crazy at 1 week! It has been a great source of comfort to him but now we are dealing with the how do we get rid of it issue. His pediatrician had told us to get rid of it by 15 months. Well that has come and gone. So I was thinking 2 years. Nope not yet. He is just not ready. We can't reason with him. We were down to only 2 and we lost one while we were in Mobile (right before we left). So we told Ben when we got home that we left it and it was gone. He cried for 3 hours. Then we tried to put him to bed and it was screaming! So I gave in and gave him the last one we had. I refuse to buy any more so he better keep up with it (and he will). Oh well there could be worse things we have to deal with! Any suggestions on getting rid of it?

If you figure out a way to do it, let us know. We are in exactly the same boat.

Claire is the same exact way and she is almost 3...AHH!! Our pediatrician said to only let her have it at nap time, bed time and in the car. He said to start taking away one of those at a time when she turns 3. I've started telling her that the Paci fairy will be coming to get her paci on her birthday. Im really not looking forward to that day! Good luck:o)

I once heard of a parent that couldn't get their kid to give up the paci until they said "I'll take you to Toys-R-Us and let you pick out anything you want if you will give up the paci." or something to that effect. It worked for them.

We're lucky, I guess. Although Abi used her paci for maybe two months, she then wouldn't take it at all after that. She learned how to use her thumb and never looked back. At least you will eventually be able to take care of the paci - hopefully Abi will always have her thumb!

That's what I would like to know too!! Gabe has only been using his for naps and at night for ages, but I can't figure out how to get to the next step. He just won't go to sleep without it and he cries and cries if I try to take it away. We are also down to our last pacifier...who knows what's going to happen when we lose it!

Not that I have a child to have tried this on...but I have heard of parents that had their child "give" the paci to younger child (maybe at church). Then that parent can get rid of it for you...I dunno...Just something I had heard/read somewhere. Good Luck Em!