Rounding Out The Weekend

The Swim for Melissa was a big part of the weekend but there was so much else.  Really it was a crazy weekend.  Friday we quickly celebrated Matt's birthday as a family.  Ben and Kate were so excited to give Matt his presents.  Ben got him a Wii game (because what 34 year old doesn't want a Wii game).  Kate got him coffee and a movie because she said they are his favorites.  She also got him a very interesting card.  Fun to celebrate Daddy!! 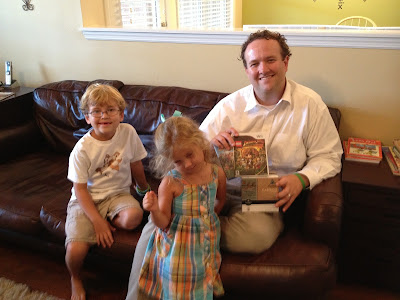 Matt asked for genetic testing for his birthday (he is such a nerd) along with tickets to the Miracle Bash.  The Miracle Bash is also a fundraiser for the NICU.  It is a fun night of foods, friends and silent auctions.  We didn't end up "winning" anything in the auction but still had a great time.  It was a great way to spend Matt's birthday. 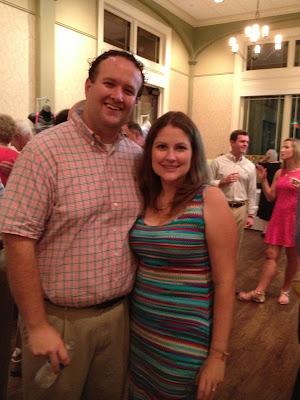 Saturday was a crazy day!  We started the day early with breakfast with Mema for Matt's birthday.  Then it was the swim.  We headed over to celebrate Baby Grace's birthday in the afternoon.  I can't believe this little thing is already 1!!  It seems like it was just yesterday when she was born.  LeeAnn planned a super cute ice cream party.  Grace enjoyed her cake! 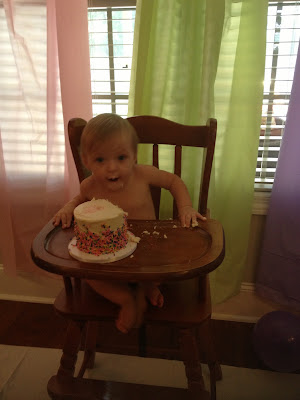 The kiddos loved the cake and ice cream of course!  They had a great time playing and celebrating. 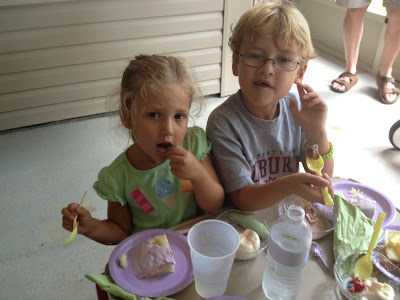 Ben had his first soccer practice late in the afternoon.  Kate and I were worn out and not feeling so great so we skipped out on the last birthday event for Matt.  Ben and Matt enjoyed dinner with my family to celebrate Matt's birthday.  Hate we had to miss it but they had a great time.  Andrew and Kelly got Matt a fun new game that they loved playing.

Sunday was a much more relaxing day with church and then naps for everyone.  It was great.  Glad we were able to pack so much fun into one weekend even if it did wear us out!