We made it through Halloween 2009! It was a busy few days but tons of fun!!! Ben had told us several months ago that he wanted to be a pirate for Halloween so I decided I was going to "make" his costume. Over time that making turned into just putting it together but I didn't just go out and buy a pirate costume. It turned out super cute!! He was the cutest pirate in town by far. He walked around saying "Arrr Matey" We practiced for a couple of days how to trick or treat and he did great! We went around to the houses on our street and he liked it a lot. He also really liked handing out candy (although we ran out pretty quickly). We also visited the grandparents all dressed up and our friends the Newbys (a Halloween tradition!) Here are some pics!

Action shot of the pirate chopping up the pumpkin 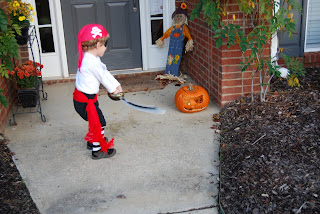 Isn't he super cute!! He loved the eye patch but wouldn't wear it and his glasses so we patched his bad eye! 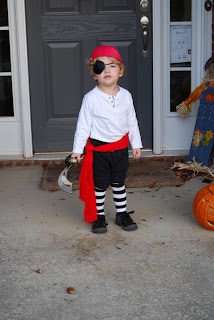 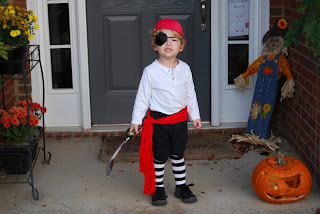 Ben and Caroline. He was practicing his big brother role. He did good until we were done taking the picture and then he just left and let her fall to the sofa. 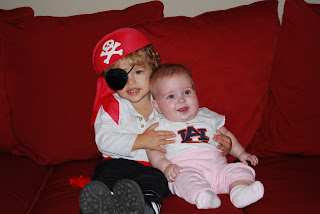