Well we did it!!!  Yep Paige and I ran in our first 5K on Saturday.  Matt was supposed to run in it as well but since Kate got sick he was nice enough to stay with her so I could go.  I hate had to miss it!  He was so excited and I sure did miss having him there.  It was a really great experience.  I am glad we were able to do it (Thanks Matt!). 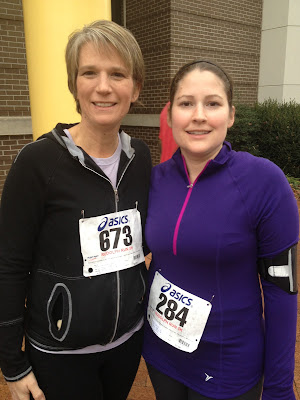 It is a really fun race because it is through downtown.  It starts at Santa's Village and Santa is the starter.  There were about 1,300 runners.  Some were dressed in costumes which was really crazy. 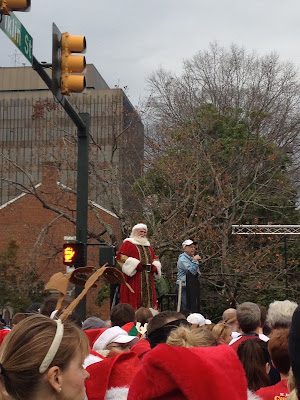 We finished!!  It was alot harder than I thought.  I learned alot though that will help at the next race.  We got off to a pretty fast pace which was probably not the best.  Should have started a little slower. It was also much warmer than we were expecting so I was a bit overdressed which made it hard.  We are used to running in our very flat neighborhood so next time we will run the race course before the race.  There were a bunch of hills that we were not prepared for.  Also I ate something before the race and I got a horrible cramp.  Because of that I had to walk for a couple of minutes to work that out.  Even with all of that I finished right at my goal time of 36 minutes.  That was right where I wanted to finish.  On our practice run that is where we finished so we wanted to do that in the race as well.  We are not real fast but we will work on getting faster!  Even at the end of the race we don't look too bad! 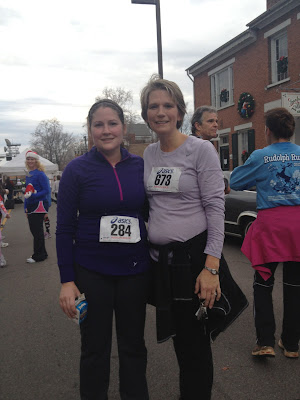 I can't wait to run in our next race.  We are checking out our options.

Since Kate and Matt were in quarintine all weekend Ben and I got to have a lot of fun together.  We watched the entire Star Wars series!  We also went to one of his buddy's birthday party.  It was at the bowling alley.  He had a great time.  I loved getting to spend so much time with my little guy even if it was stuck in one room of the house. 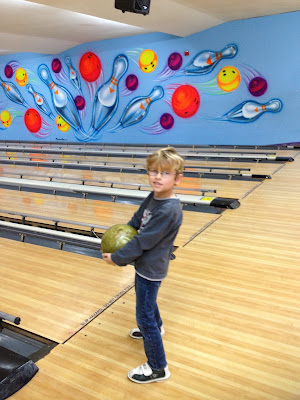 I think Kate is finally on the mend.  She had a great day today and seems almost back to normal.  We continue to pray that we all don't get sick.  Too much fun Christmas stuff coming up to be sick!

At that time Mary got ready and hurried to a town in the hill country of Judea, where she entered Zechariah’s home and greeted Elizabeth.  When Elizabeth heard Mary’s greeting, the baby leaped in her womb, and Elizabeth was filled with the Holy Spirit.   In a loud voice she exclaimed: “Blessed are you among women, and blessed is the child you will bear!   But why am I so favored, that the mother of my Lord should come to me?   As soon as the sound of your greeting reached my ears, the baby in my womb leaped for joy.   Blessed is she who has believed that the Lord would fulfill his promises to her!”  Luke 1:39-45

Congrats on running your first race!

Ben looks so tall in the picture at the bowling alley!!