I am learning with preschoolers they go through phases when they are "into" certain things. Well the latest obsession around the Eckley household is Batman!! We are not even sure how this got started but boy it is all we talk about. We think Ben learned about Batman from a Fisher Price toy catalog. They have some Batman toys and he asked us about them and I think we told him about Batman. Since then, that is all he talks about. Batman and Robin are going to get the "bad guys." He has 1 Batman figure that he got and he loves it!! (Don't worry more coming at Christmas). But he does not limit his Batman playing to just the figure he uses his cars, stuffed animals and pretty much any other toy. They all become Batman. It is amazing to see his little imagination working and coming up with stories. He has learned all the bad guys names but his favorite is Mr. Freeze. We have shown him some of the old Batman shows on Youtube and of course he thinks it is awesome. He has also named everyone in the house. He is Batman. Matt is Robin. I am Supergirl. And Kate is Batgirl. It cracks us up. Really he talks about Batman all day long!! When I picked him up from school one day last week I asked him what he did and he said "I play Batman with Derek. I Batman. Derek Spiderman." I can only imagine what went on in class!

He has invented a "Batman pose" that he does whenever he is pretending to be Batman. 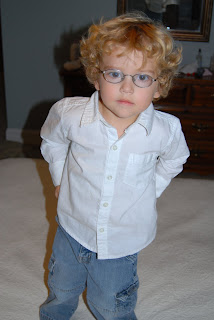