Ben's teacher met me at the door to the classroom the other day and said " I have to tell you a story that's so Ben." That line right there cracked me up. Ben is a quirky little guy! He likes things a certain way! Mrs. Teague told me that she had gotten each of the kids a bucket to keep their art supplies in. They put their glue and scissors and such in it. She then put a big bucket of crayons in front of them and told them to pick out a bunch of different crayons to put in their buckets. Ben followed the instructions perfectly. Mrs. Teague looked in his bucket and she said there were 10 different shades of green crayons. He had only picked out the green. That's my boy!!! He loves his green.

He does not like art or coloring or anything related to it. Today when I picked him up from school, there were giraffe pictures they had cut out and colored hanging on the wall. I knew right away which one was Ben's! It was the one that did not have a single coloring mark on it. All the other kids had colored spots and different things on the giraffes. Ben's was perfectly cut out but also perfectly plain. He has no desire to color! He did draw a nice tree next to the giraffe for it to eat from. Kindergarten is going to be a long year for him!! 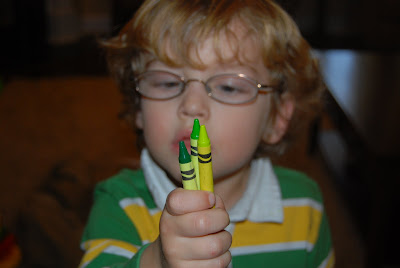 He is a smart little boy!!! Awesome that he knows every shade of green. Too funny that he doesn't like coloring at all.